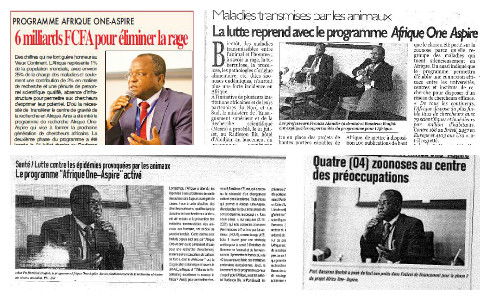 Thursday 21 July 2016 in Abidjan (Côte d’Ivoire), the launch of the second phase of the capacity building program for African researchers on the fight against zoonoses (diseases transmissible from animals to humans) through approach “One Health” initiated by the consortium Afrique One. More than twenty newspapers all types of combined media (TV, Print, Radio and Internet) are echoed this high scientific impact event. In the two weeks since the program began, 21 (twenty one) articles were published in the Ivorian press for a presence of 19 newspapers. This demonstrates the relevance of the program to media men who have decided to make a wide distribution The Chinese news agency Xinhua also found appropriate to speak about Afrique One-ASPIRE in his Ivorian press review of Friday 22 July 2016, the day after the ceremony. Some press organs not present at the event echoed in their various publications the days following the launch of the program.

The issues addressed by the Program Afrique One-ASPIRE have all been variously raised in various articles and the budget of this program on the “front pages” of the newspapers : L’essentiel, Avenue225, Djelifaso du Burkina Faso and l’Expression N°2068, we can read the following titles respectively: “Afrique One-ASPIRE, the onslaught of zoonotic diseases”, “Afrique one-ASPIRE, for the elimination of diseases transmitted from animals to humans”, “Ivory Coast : Second phase of the program Afrique One-ASPIRE – Ivory Coast commits the fight against zoonoses “,” Health / fight against epidemics caused by animals. Afrique One-ASPIRE program activated “. These media outlets focus on one of the objectives of Afrique One-ASPIRE which is to combat zoonoses. Daily Inter No. 5429 goes further by specifying one of the zoonoses targeted by Afrique One-ASPIRE: canine rabies. “The fight against zoonoses: The program Afrique One-ASPIRE to eliminate canine rabies in 5 years,” he headlined. Indeed, canine rabies, tuberculosis, brucellosis and foodborne diseases are the main zoonoses covered by Afrique One-ASPIRE. As for the daily Le Temps, Ivoircontinental.net and Abidjan.net, they focus on the amount of funding granted by the consortium Afrique One for the second phase of its program to strengthen the capacity of African researchers in the fight against zoonoses. We can read in the “one” of the different media outlets: “Communicable diseases between animals and humans: 4.257 billion CFA francs in game for researchers” (Le Temps # 3839), “Ivory Coast : over 4 billion CFA francs planned for the second phase of ASPIRE Africa-One “(Ivoircontinental.net) and” Launching the 2nd phase of ASPIRE Africa One-: over 4 billion CFA francs to eliminate zoonoses ” . This funding that rely these newspapers to build their article is about EUR 6.5 million. It was provided by a donor consortium of the Wellcome Trust, the African Academy of Sciences and UKAid.