Dr Gloria Ivy Mensah: “TB research is about people and as a scientist you need to engage to inspire.”

Each year, #WorldTBDay is celebrated on March 24 to raise public awareness about the devastating health, social and economic consequences of TB, and to step up efforts to end the global TB epidemic. According to WHO, “TB remains one of the world’s deadliest infectious killers”. It is one the main zoonotic diseases addressed by Afrique One-ASPIRE. Since the launch of Afrique One-ASPIRE in 2016, a research group has been working on the pathways of TB control. 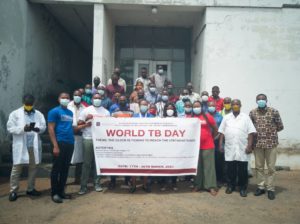 From 17 to 24 March 2021, the Afrique One-ASPIRE research group on TB conducted a series of Community and Public Engagement (CPE) activities in Ghana, a country whose  estimated and notified TB cases  for 2020 were  44,000 and  12, 333 respectively . Dr Gloria Ivy Mensah is the postdoc of the Afrique One-ASPIRE research group on TB. In this interview, she presents the activities her group conducted and the lessons drawn from the experience.

Your team conducted various activities around the world TB day to create awareness about the burden of TB, what was your assessment after the activities? 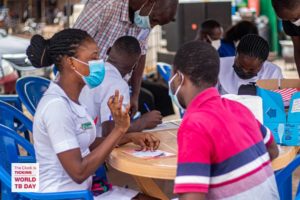 Gloria Ivy Mensah:
Our main objective for this CPE was to create awareness about ALL forms of TB including zoonotic TB, paediatric TB, latent TB and extrapulmonary TB. This informed the selection of the target audience for the direct engagement which were abattoir workers, school children and attendees at children’s clinics. So, to that extent, the activities were very well appreciated and the objectives were achieved based on the feedback we got from the participants directly and through the feedback forms they filled.

You did this CPE in collaboration with the National TB control program, what was the experience like working with them? 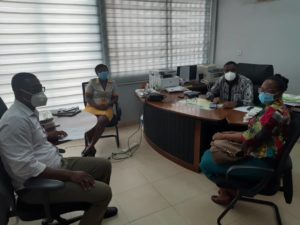 Gloria Ivy Mensah: In Ghana, the Noguchi Memorial Institute of Medical Research (NMIMR) has always worked in close collaboration with the National TB Program (NTP) in all our TB research so the CPE was no exception. I had a very good meeting with the Program Manager and the Deputy Program Manger before the start of the activities and they were very excited. They even suggested the use of their mobile X-ray van for screening of the community within the livestock market where we had planned to an engagement on zoonotic TB. This activity ended up being the main World TB day activity in Accra that was covered by the media. We also had a staff of the NTP join us on all the television appearances we did to create awareness on TB. We are very grateful to the NTP.

You engaged with various groups, what stood out for you? 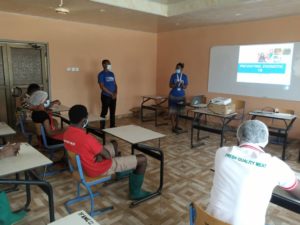 Gloria Ivy Mensah: For me and for the rest of the team, we were very surprised by the school children we engaged. They were very curious and enthusiastic and asked very good questions. This assured us that they had understood the information we shared with them and would act on them. We have all seen how children have understood and embraced wearing of facemasks and handwashing to prevent COVID-19 so we are confident that they will do same with the knowledge we have given them on TB.

What is the place of education in the process of eliminating TB and at this stage of research focused on TB, why should scientists consider community engagement? 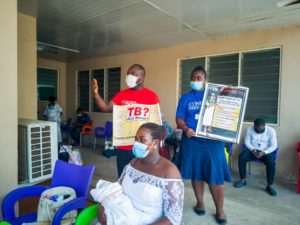 Gloria Ivy Mensah: TB is a disease of public health importance and it’s a disease with social dimension so the best strategy to fight TB is to have a well-informed population who understand the cause of TB, the symptoms, how to prevent TB and what to do if one has TB. The global agenda is to reduce the incidence of TB to less than 10 cases per100,000 population by 2035. There is no way we can achieve this target if the population is not aware and empowered to take measures to prevent TB infections and to seek early treatment (which is free) when they are infected. Scientists need to actively participate in community engagement because it builds trust with communities that can facilitate research and make dissemination of research findings easier. TB research is about people and as a scientist you need to engage to inspire.

Today what are the main research evidence to guide effective national policy aimed at eliminating all forms of TB? 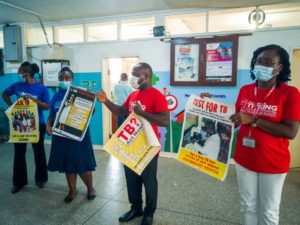 and Chad. To avoid complications caused by misdiagnosis of Non tuberculous mycobacteria (NTM) TB as Multidrug resistant (MDR) TB, there is the need to make species identification an integral part of TB diagnosis. There is also the need to create awareness among TB clinicians about NTM TB to raise their index of suspicion. To find the missing cases of TB in children, active case search outside the hospital setting should be done. Importantly, to reach remote areas with TB services, we have shown that we can use a One Health approach where community members can be trained to recognize and report symptoms of TB in both humans and cattle to a central lab through mobile phones and veterinarians or doctors can take samples from presumptive cases and transfer to the appropriate lab for further tests and action 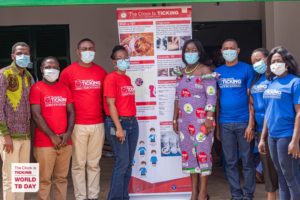 Gloria Ivy Mensah: I want to thank the TB CPE team for their commitment to the activities and putting in the hard work and time to make the program successful. I am also grateful to our Principal Investigators, Afrique one-ASPIRE coordination especially the CPE coordinators for their support. I also wish to thank African Academy of Sciences (AAS) for making funds available to all the consortia under DELTAS for CPE. It has been a rewarding experience and I will recommend that CPE becomes an integral part of the research process for every scientist.