A paper has confirmed for the first time in Sub-Saharan Africa, the presence of Brucella abortus in pigs, a bacterium that normally causes abortion in cattle and goats. The bacterium responsible of brucellosis disease can transfer from infected animals to humans during direct contact or when consuming undercooked or raw animal products.

In an article published in the BMC Veterinary Research Journal, freely accessible to all, PhD candidate, Mr James Akoko, reveals the finding of the bacterium in pig using serological and molecular techniques in the rapidly growing pig sector in Kenya.

This is the first study to detect this particular Brucella spp. in pigs in sub-Saharan Africa using adanced lab techniques. Pigs are traditionally known to be infected by B. suis, but the study detected B. abortus that has always been associated with ruminants. This provides essential new knowledge regarding the epidemiology of brucellosis in a mixed livestock ecosystem in Africa. Close interaction between pigs and cattle could have facilitated cross-transmission of B. abortus to pigs. 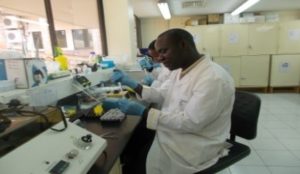 samples from a fresh pork abattoir in Nairobi. He analysed the blood using two standard tests (Rose Bengal Test and ELISA Test) both of which detect the presence of antibodies against the Brucella abortus bacterium. When samples tested positive for the bacterium, Mr. Akoko and his team confirmed the results using two molecular biology methods (standard PCR and Real Time PCR) that detect the presence of the bacterial DNA in the pig blood. This research is critical to Brucellosis epidemiology and thus to its control.

Most countries in Africa predominantly target ruminants (cattle, sheep, and goats) in brucellosis control programs. The detection of the zoonotic  Brucella abortus in pigs, suggest that pigs could also be contributing to the transmission of brucellosis to humans. Therefore, this new knowledge indicates that pigs should also be included in brucellosis control programs, for effective control of this zoonotic disease in Africa, especially in areas where close contact between different animal species is common.

The Afrique One Consortium is a group of African scientists working in universities and research institutions in both East and West Africa. They collaborate with universities in the UK and Switzerland and their research work is funded by the Kenyan-based African Academy of Sciences under the DELTAS research and training program.