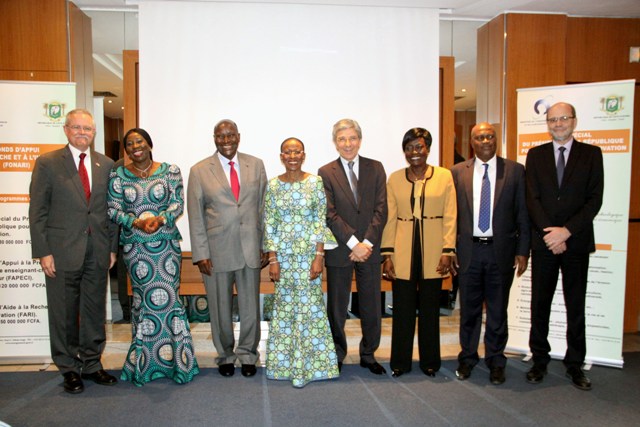 The ‘Fonds d’Appui à la Recherche et à l’Innovation’ (FONARI) are available since 29th December 2016 to subsidise Ivorian researchers. The funds are made available by the Government of Côte d’Ivoire in collaboration with the Ministry of Higher Education and Scientific Research and are endowed with an amount of 500 million FCFA. According to Prime Minister Daniel Kablan Duncan, FONARI represents a prelude to the forthcoming establishment of a National Fund for Science, Technology and Innovation.

FONARI includes 3 programs: the SPECIAL PRIZE OF THE PRESIDENT OF THE REPUBLIC that has a budged of 80 million FCFA, the SUPPORT FUND FOR THE PROMOTION OF WOMEN’S TEACHER-RESEARCHER AND RESEARCHER with 120 million FCFA and the main FUND FOR SUPPORT TO RESEARCH AND DEVELOPMENT, INNOVATION (FARI) with 250 million CFA.

Professor Bakayoko-Ly Ramata, Minister of Higher Education and Scientific Research, and FONARI, emphasises the vitality of research activities in Côte d’Ivoire and states that the establishment of FONARI marks a ‘historic step’ in this country.

Next step: moving to 1% of GDP investment in research

Professor Ramata pointed out to the Prime Minister that the current contribution of Côte d’Ivoire to funding science is relatively modest. At current, the country is allocating less than 0.35% of its GDP to finance scientific research which is below the average in sub-Saharan Africa (0.4%) and far from the 1% set by the African Union in its Consolidated Plan of Action for Science and Technology.

However, Professor Ramada promised that the 1%-benchmark will be reached by 2020 to allow for innovative technological services, and to solve socio-economic problems while enhancing the quality of scientific publications of Ivorian researchers.

FONARI will run along the Fund for the Strategic Support to Scientific Research in Côte d’Ivoire (PASRES) set up on the 15th June 2007. PASRES is a competitive research fund that has been established with a capital of 5 billion FCFA allocated by the Ivoiro-Swiss Fund for Economic and Social Development (FISDES). The executing agency of PASRES is the Swiss Center for Scientific Research in Côte d’Ivoire (CSRS).