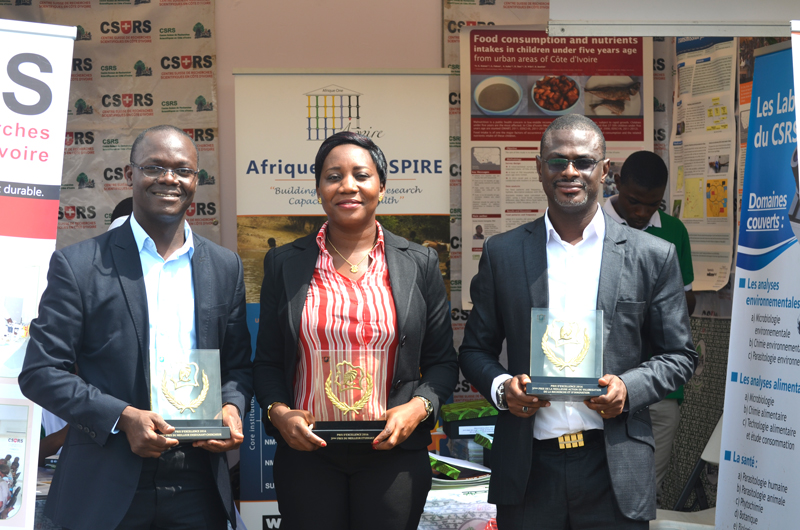 Award of Excellence for Research 2016 in Côte d’Ivoire: some Afrique One post-docs rewarded

In margin of the Ivorian research promotion week 2016 (SEPRI 2016), was held at the initiative of the Ivorian higher education and scientific research on the 8th of December 2016, the Award of Excellence for Research 2016 in Côte d’Ivoire.

Dr Karim Ouattara, Researcher at Félix Houphouët-Boigny University and Dr Sylvain Traoré, Researcher at Péléforo Gon Coulibaly University received respectively the award of the Best Teacher Researcher and of the Best Research Valorization and Innovation. The laureates received each of the Minister’s hands, a trophy stamped with the Ivorian coat of arms, a certificate signed by Prime Minister Kablan Duncan and a check for one million CFA francs. It is with great pride that the Centre Suisse de Recherches Scientifiques en Côte d’Ivoire (CSRS) and the research consortium Afrique One-ASPIRE congratulate these laureates and welcomes the model of partnership with the Universities of Côte d’Ivoire in terms of excellence in research.

Dr Karim Ouattara was the program the Program manager of Afrique One (2009–2016). He is Senior Monitoring and Evaluation Assistant (SMEA) for Afrique One-ASPIRE. Dr Sylvain Traoré is an Afrique One post-docs fellows.