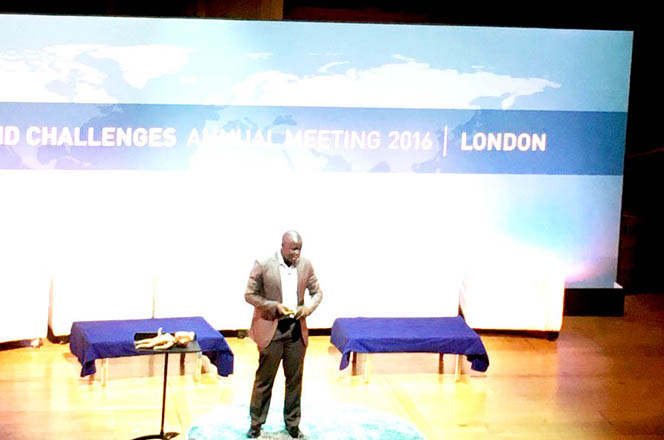 From the 24th to 26th October 2016, was held in London, the Grand Challenges 2016 #GC2016. It is an initiative launched in 2003 by the Bill & Melinda Gates Foundation, which came to include multiple funding partners such as Wellcome Trust, USAID, DFID, Canada, Next Africa Grand Challenge, the African Academy of Science (AAS) and the eleven consortia winners of the DELTAS grant. The Director, Prof. Bassirou Bonfoh, represented Afrique One-ASPIRE and participated to a group work on “Research Ecosystem in Africa, crop science, from innovation to impact”.

The key message developed to the Grand Challenges 2016 is the investment in science. According to Bill Gates, “the world needs innovative leadership now more than ever; investment in science is required”. This message was well received by more the 900 participants to the meeting including scientists, innovators, funders and the private sector. Many organizations such as the Bill & Melinda Gates Foundation, the UK-AID and the Wellcome Trust committed to pursue their investments in scientific research and innovation. “A globally engaged & outward-looking Britain will continue to invest in science & technology”, said Priti Patel, Secretary of State for International Development (UK).

The 12th Annual Grand Challenges Meeting was also an occasion for African scientists to present their research programmes and how they can produce good results. The only way forward is collaboration. “If I could summarise this week’s #GC2016 meeting into one word, it would be COLLABORATE”, he tweeted.

Impressed by the work achieved by African scientists, Dr Jeremy Farrah, the Director of the Wellcome Trust, he tweeted: “Future science in Africa in very good hands.”